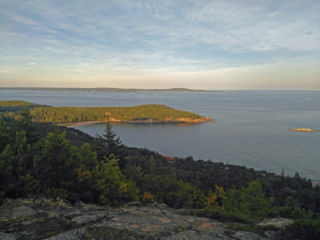 We went hiking at 5:30pm on a day in early September, and from trail marker to trail marker we had the mountain to ourselves. We saw no one until we got to the parking lot. This is one of the fascinating aspects of Acadia National Park. It’s one of the smallest national parks in the country and at the same time one of the most visited, and yet it’s entirely possible to go to the busiest sections during peak season and get solitude.

Gorham Mountain is a north-south mountain that runs parallel to the Ocean Drive, the latter of which is one of the busiest sections in the entire US national park system. It’s busy for a reason – it’s beautiful and iconic with Sand Beach, Great Head, Thunder Hole, and Otter Cliffs. The Beehive nearby is one of the most hiked hikes in the park, too. And Gorham is one of the easiest mountains to hike because it’s not tall and not steep, but there it is, with spectacular views and not nearly as many people on it as you’d expect.

I tell guests that Gorham makes for a wonderful introductory hike into the park. One gets to see three of the main sites in Acadia and get away from people at the same time. There are a few different ways to hike it, and they are spelled out below:

We’re full of these types of tips because we do these hikes on our days off. Click our booking engine to reserve today and get more helpful tips at: www.miramonte.com.