Mira Monte Inn took it’s place in Bar Harbor History in the 1870’s when Orlando Ash began construction. Mr. Ash was the son of Captain Benjamin Ash who came to this island from Gouldsboro in about 1820 having bought several tracts of land from the shore near the bar to the mountains. The Ash brothers were early entrepreneurs – they cut the trees, sold the logs and built houses on the cleared land. Several of the historic homes on Mt Desert Street and nearby Holland Avenue were built by the Ash family.  In the attic of the inn, one can see that the Ash family first built a two-story building, then they added a wing (which today holds the dining room and the kitchen). The third year saw construction of the ell which today holds bedrooms, but which then held servants’ working and living quarters. When renovating the back of the ell, the carpenters found a signed board inscribed “1868”. All Maine workers traditionally signed and dated their work. By the time the trees were cleared, the Hudson River artists had discovered Mt Desert Island. They sold their paintings back in New York and Philadelphia and became Mt Desert Island’s first marketing ambassadors.

Their tales of the great beauty and wonderful climate enticed the wealthy industrialists to make the long boat trip “downeast” to Eden. This summer escape was truly an escape; the heat, humidity, and disease of the mid Atlantic summer months – where lack of electricity, air conditioning or cooling breezes-made life there nearly unbearable. Mt Desert Island’s pleasant day temperatures and cooling sea breezes at night indeed seemed like Eden (which was the early name of Bar Harbor). Since they spent the summer here once they arrived, they needed to rent living quarters. Though Orlando originally built the house for himself and his wife, they only lived there in the fall, winter and spring. In the summer, they went to her home on Gott’s Island, and rented their home –known then as Ash cottage-to the wealthy summer visitors.  Notable guests have included Maine Senator Eugene Hale, Secretary of the Navy William Chandler and industrialist James P. Scott. The cottage was arguably to receive it’s most prominent guest in 1884 when it became the summer campaign home of senator and presidential candidate James G. Blaine- one of the foremost political figures of the gilded age.

In 1890, eminent Philadelphia physician and naturalist Henry C. Chapman, curator of the Philadelphia Academy of Natural Sciences, bought the home from Orlando Ash to use as a permanent summer residence.  Dr. Chapman and his wife Hannah promptly set about improving the home in keeping with their social station. They added the Greek portico and columns that surround the porch and renamed their estate Mira Monte, meaning “behold the mountains”. The home was to become something of a hub for visiting members of Philadelphia’s high society under the Chapmans. One account from 1896 recalls the Mira Monte as site of the “biggest private affair of the season”, a grand event at which the Countess Carola de Lagier-Villars “poured tea.” Another event, depicted in a photo at the inn, shows a ladies’ putting contest sponsored by wealthy philanthropist and socialite Peter Marie. After Dr. Chapman’s death in 1909, Hannah continued in the role of hostess until her passing in 1931.

In 1947, Bar Harbor suffered a devastating fire which razed much of the town and many of it’s historic homes. The Mira Monte was spared, the fire having stopped it’s advance a mere half block away. Mira Monte thus remains one of the oldest surviving homes in the area.  In the aftermath of such destruction, many summer residents were never to return. The Mira Monte passed through several hands until 1980 when Bar Harbor native Marian Burns purchased the home, by then nearly in a state of disrepair, in order to fulfill her dream of opening a Bed and Breakfast Inn. She thought that a building that had a name for almost 100 years should be allowed to keep it. So, she called her B&B Mira Monte Inn and began the painstaking process of restoring the home to its former glory.

In 2019 the inn was purchased by Bruce  and Cheryl Ueno.   Bruce had been a General Manager with Marriott and Cheryl worked for Disney and run a successful piano studio.  Today, they continue the Mira Monte’s legacy of hospitality and welcome you to partake of it’s rich history. 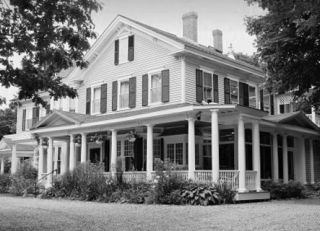 Mira Monte Inn was built in 1864 as a summer cottage by a prominent member of the resort town of Bar Harbor.  The Inn is located in the center of Bar Harbor Village, which is included in the National Register of Historic Places. 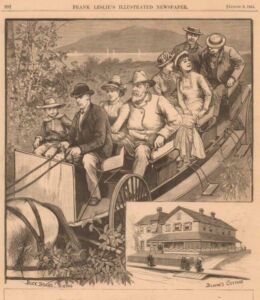 The Mira Monte has served as a summer retreat for many noteworthy individuals throughout it's history, including Senator and 1884 presidential candidate James G. Blaine.  The newspaper illustration above depicts Blaine and the Mira Monte as it appeared in 1884. 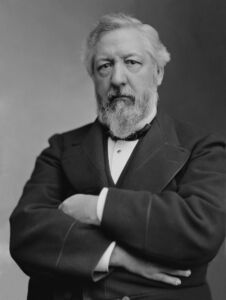